Millions of Americans are very satisfied with the decree anti-immigration of Donald Trump.

> See also : 57 percent of Americans favorable to the decree of the anti-immigration Donald Trump

"There is much talk of protests calling for the annulment of the decree, but it must not be forgotten that millions of Americans are very satisfied that this campaign promise is so quickly honoured. "

"It was one of his campaign promises, to protect America against all the odds. For many of its supporters, Donald Trump has met its commitments in signing this new executive order on immigration. The Florida part of the key won by billionaire during the presidential election.

Testimonial : "I think with everything that is happening in our country, the bombings and the killings of innocent people, personally, we should all send them home, because the controls have never market, to separate the good from the bad muslims. "

The decree in question target 7 countries : Yemen, Iran, Libya, Somalia, Sudan, Syria, and Iraq. A ban for all their nationals to enter the u.s. for 90 days. The program of reception of refugees is also suspended for 4 months. For the syrian refugees, their access is blocked until further notice. But for some of its supporters, Donald Trump should go even further.

Testimonial : "This prohibition should apply to all muslims. Why create a new problem ? There are already enough here. "

On the side of the anti-Trump, this decree has aroused the indignation. In New York, Washington, Chicago, or Seattle, anywhere in the United States, they were thousands to protest against this new policy. " 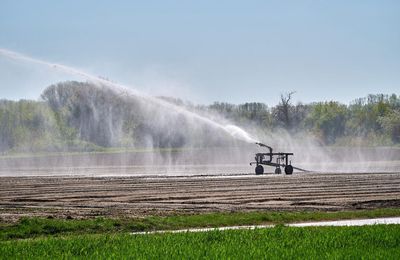